For in-character discussion of NexusClash. While you must still be considerate of other posters, you may explore your role-playing side and do not need to extend the same courtesy to characters.
Post Reply
5 posts • Page 1 of 1

No gods above us! Humanity shall claim victory for themselves!

Hi, this is a thread for the Adamant Kinship. I know that, mechanically, Guilds don't exist yet - but we don't need that! I intend to push forwards a group dedicated to the roleplay aspect of liberating humanity from the great game of the Elder Powers. To strive for a non-Elder Power victory, with the mechanics-based schemes that may involve, such as striving for 0 Infusion. Not Good, Evil or Neutral - ZERO. Screw the Elder Powers.

I'm also very open to further ideas on how else to rebel against the system and strive for this ideal - join in the fun and let me know your thoughts! Down with the Elder Powers! Humanity shall rise!

In true AK fashion, there won't be a faction for this either, although I've made a Discord to coordinate and discuss: https://discord.gg/snZBdxQ7

Spread the word! Put up the posters! Let the Elder Powers know that mankind will WIN! 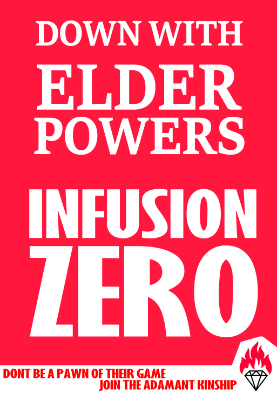 OOC: I moved this to Club Jormungandr since it feels like a better fit here. Sign your posts with a character!

I have no issue with the destruction of the Elder Powers since there is one truth above the elder powers that humanity must strive for. Of course I am speaking of adherence to The Fire Code. Already brave MFD firefighters have scoured this new land for home base where we can begin research on the proper ordinances. These domed structures must have had their fair share of over-occupancy incidents that usually lead to arson and mass death by burning (99% of cases I have responded to at least) and even more stringent code must be enforced.

It's really simple guys - if you don't want to die in a horrific flesh-melting fire, you need to leave the libraries alone.

C'mon, now. There's no way we'll unrig this thing - the world is about pain, and facing pain.
If the Elder Powers had left humanity an out clause, it'd be one that spontaneously conveyed us right into Tholaghru's cavernous gullet as some kind of cosmic consolation prize.

Even the powers that sell themselves as 'good', well I'm sure I don't have to convince any of you here. I don't think there's any future in trying to build a future without them, but I guess I'll be quietly cheering for you all (you can do it).

About the fire patrol, though... You're going to have to pass that boot around some other time. I've got no money. None. Nil.

A recursive cat, formerly known as the mechanical cat, makes available a recording which may be of interest.
Top
Post Reply
5 posts • Page 1 of 1