HARD DISCLAIMER: I have no horse in this race. I actually enjoy the process of leveling new characters (yes really) and rarely if ever manage to hit the exp cap because I'm not a petmaster player or some hunting genius like plummer. it L I T E R A L L Y does not matter to me if it stays or goes, I just want to UNDERSTAND

Why's the EXP cap still a thing? Early breath, I can understand why it's a thing (understand does not mean agree since if a faction wants to funnel all their AP into power leveling one character, then it's their business, they'll have one big guy and then the rest of the squad is all mortals, way to go) but when everyone's already maxed out and the only people that really affects are playing catch up, what's even the point?
I'm in the minority that enjoys playing T2 and early T3. Why hamstring power leveling when the majority just wants to get to level 30 and start playing the game, for real?
What's wrong with someone finding out a way to gigafarm experience and have a million exp?
It's literally just a number. It's not even dick size. You can DO stuff with a big benis. You can't do shit with a million experience other than
actually I will edit a meme for this 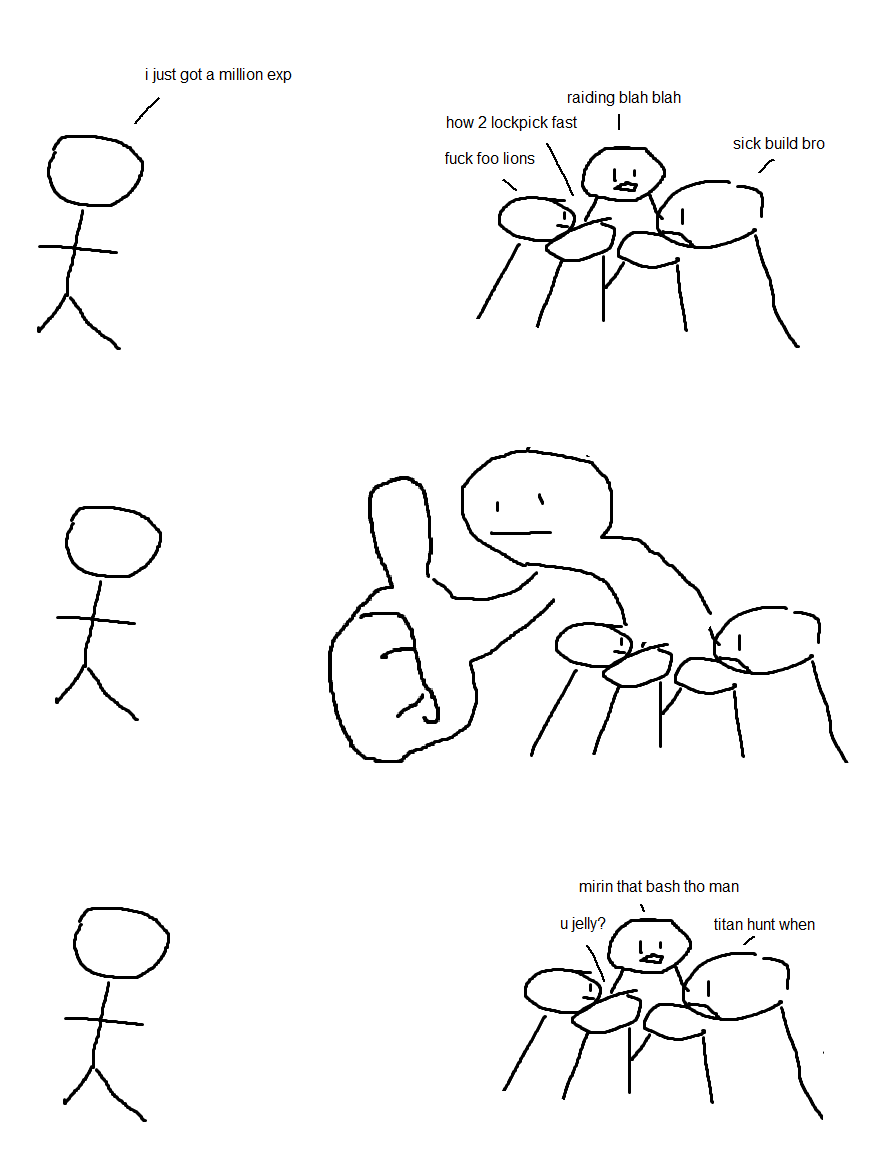 IT'S LITERALLY JUST FOR BRAGGING
I can ALSO understand the "uhhhh you're not supposed to help your bros grind" mindset even though that is FUCKED because it actually gives you tangible rewards in the form of CP but exp cap? WHY?
FOO LION DELENDA EST
Top

agree with you etc and such
Top

As you guess, the 1000xp cap was a failsafe for unanticipated methods of coordination or other usage of game mechanics to powerlevel. It’s for sure up for discussion, and I’m very interested in community opinions about caps. I’d say that the only argument I’d state in favor of it is that if there is an easy way to power-level to 30, then you do rob new players of any progression which is part of the gameplay. It’s like, oh hey lets powerlevel you to 30 within two weeks so you can start grinding booze drank, whooo!!

I know that’s strawman as hell, but I’m not standing by it too much. I agree that a year into the game, there should probably be some boosts, but I haven’t thought the best way to implement it. Toss your ideas out, but i’ve probably heard them, its which one fits into longer term plans the best that’s difficult. Those plans being some sort of in-game tutorializing or other guidance/scripting so that people can play their first 300ish AP without having to read a wiki. Starting someone at level 15 for example is imo overwhelming unless you give them a generic build which feels meh.

Also, I don’t think the 1000xp nor the 250xp caps are too awful to deal with, and there are some pending changes to other XP matters that should help. Thread should have good content for discussion in about a week (hopefully)
Top

i remember writing something like this somewhere few months ago, but, i'd make xp cap:

so like 200 + 20 per t3 alt. would take care of unforeseen "omg don't learn to play well???" scenarios early on, but would be way more lenient after everyone's t3.

Re: "oh hey lets powerlevel you to 30 within two weeks so you can start grinding booze drank, whooo!!"
i think this is a problem with grinds which should be removed from game altogether - i can't wrap my head around the concept of "we must gate character power level behind doing meaningless, repetitive actions"* -, but i'll take the latest easier grind patch as a move in the right direction i guess.

i'm not saying necessarily that i think woah we should get to max power level as fast as possible, but I do find in general leveling up rather unfun, to the point once I made 300 potions on one character so I could reset and sacrifice them all at a font within 2-3 days for 6000 exp (just enough for tier 3). but that's just me.

food for thought, for a freshly made alt I played killing npc's up to lv 15~16ish (when killing t1s exp drops significantly) was quite enganging as far as playing the game is involved. after that I used infusion which was boring as all get out (and anyone who suggests giving out infusion pacts for newbies as "good exp method" should really stop trolling new players???)

* why not give cosmetic/graphic thingamajigs to players who like stokpilin big nummer instead? i have a few moderately well ground characters. i would not be aggravated if a newer player with better game understanding than me managed to surpass me on ranks because they played better (=more exp) instead of the current "clicking search 10 million times for 8 years so you can finally play your power fantasy".
Top

re: grinds - our fix on grinds was trying to move in the direction of taking power out of veterancy, but was only meant to be a bandaid. Lots of ideas about grinds have been pitched, by community and devs, and any solution is making someone angry (aside, of course cosmetics are a great idea for ranks, but aside from custom player icons, it's a text game lol). Grinds are just a symptom of the actual problem which is the lack of depth on endgame content. The active count has been dropping a bit lately, and it's not surprising that after a year+ in the new breath, the whole thing is getting a bit stale. I felt a similar slowdown during the summer rush of 2020 to summer 2021.

re: finding levelling up rather unfun - your perspective is that of a multi-year veteran of this game, who has probably taken like a dozen or more characters to max. I'm not saying that to discount you, we do need to make sure the game is entertaining enough for our longtime players also. I do think that people who get engaged with this game for the first time have a little more resilience because of the novelty. However, I think we have more issues getting past the first 500 AP than anything beyond that currently. I am very glad that you found NPC combat much more interesting for those first 15 levels or so, smoothing out the start was a big goal.

re: xp cap - As has been stated, the cap is way more interesting early on, and quickly becomes irrelevant. Going by T3 population has way too much slope on the line though I think, it's actually a metric we looked at when we were thinking about how NPCs should level up.
Top

Those are good ideas, in my opinion. No one wants to be a peasant in a world of demigods.
Top
Post Reply
7 posts • Page 1 of 1