For in-character discussion of NexusClash. While you must still be considerate of other posters, you may explore your role-playing side and do not need to extend the same courtesy to characters.
Post Reply
6 posts • Page 1 of 1

A huge man in red armor stands in front of the ruined remains of a popular fried chicken franchise restaurant. He's wearing a fedora, comically on top of his red horned helm and holding a microphone. Upon further inspection you see there's a skeleton arm also holding on to the microphone
Is this... fried chicken?
No... no this is fried ANGLE. 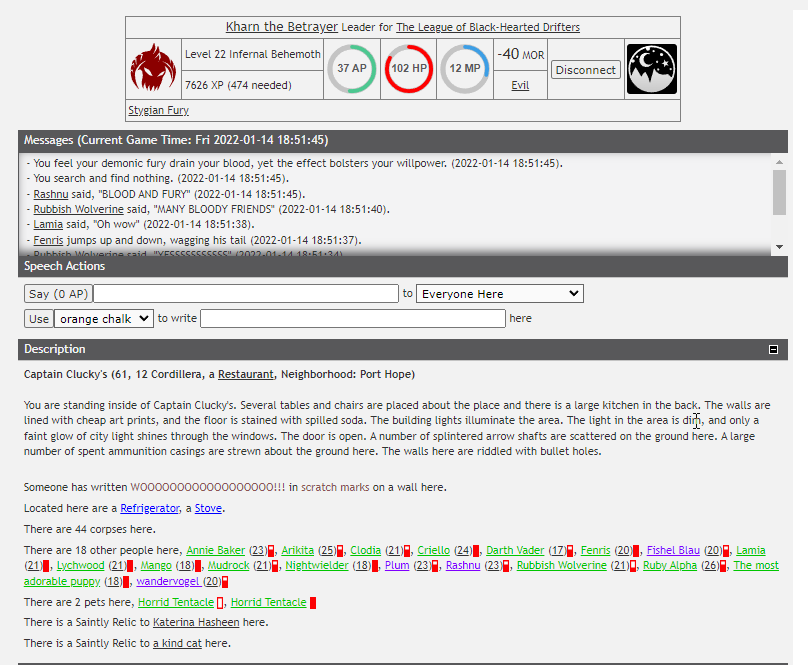 Knowers will know that Captain Clucky's used to be the heart of Angelkind on Cordillera. Past tense. It's salted, ruined and broken.
CAN WE GET SOME PSYCHOMETRY NERDS IN THE SCENE >>>PLEASE<<<

a meek demon in a business suit with pathetically small horns and some arcane looking equipment that looks like a vacuum cleaner scurries into the scene. He uses the vacuum cleaner to sniff around for a bit, pushes up his glasses and declares:

"According to my calculations this place is fully infused to evil, furthermore I-"
a gigantic red fist enters the frame and punches the demon.

BASICALLY, IT'S ALL GONE TO SHIT.
But you're wondering, could a small faction have done THIS?

He walks into the ransacked building. You see "OPEN THE AIRLOCKS NOW OR THE TERROR WILL CONTINUE" scratched into the walls, along with 44 angel corpses, freshly butchered, some on fire.

No. No we couldn't have. But with the combined might of BIG EVIL™, anything is possible.

You hear murmurs in the background. "what the fuck is a big evil?", a mortal says, shortly before being crushed by a flying ambulance.

BIG EVIL, or "The Downstairs Agreement" as some of the more ELOQUENT members of this ALLIANCE would call this, is a response to the tyranny of the Angels and Undecided SCUM that have long trodden upon us. We will no longer be shackled by our base nature (most of the time) and you will no longer sleep peacefully knowing that the crabs are tearing each other down from the bucket.

The man in red grabs the camera violently and shoves his face into it. Spittle is somehow flying from his closed helmet.

We WILL terrorize you wherever you hide. We WILL coordinate and boom your vaults. We WILL fight and murder your kind until we've had our fill, and then we'll do it again, and again, and again, until you leave these lands and until all the planes are ours.
All signatories of the Agreement were represented in this ad-hoc impromptu raid. The violence will only escalate from here on out. More and more demons will flock to our banner, we will consolidate and strike you down as many times as it takes. This is the first and last warning, forfeit Valhalla, go back to your Paradise and your floating islands, and don't return. Do that, and you may buy yourselves some time to recuperate from this GRIEVOUS mauling.

THIS WAS KHARN THE BETRAYER, HEAD REPORTER OF THE LEAGUE OF THE BLACK HEARTED DRIFTER JOURNALISM CORPS, REPORTING LIVE FROM PORT HOPE, CORDILLERA. LATER, ASSHOLES.

The gigantic person spikes the mic on the ground and takes wing. He would later be murdered by a rabid pack of Judgemasters while attempting to call his parents for a ride home. Such is the bigotry of Angels.
Top

THE AIRLOCKS ARE NEXT

This is why you're the spokesman, Kharn, you have such a way with words.

To the general audience... that's right folks. You heard it here first--demons finally realized they can kill more stuff if they all kill in the same direction. Say your prayers and sleep with a light on.

We're ready, we're rowdy, and we're coming for you.

Incidentally, that's the same slogan I use for my cam service.
I am the filthiest casual.

Hear hear, nice to see some proper raiding, even being on the recieving end. Stoked to see what's next.
Top

I have it on good authority a certain canine definitely marked his territory. Especially the relics.
Top

I'll come and raise a few of you later