I really like Blood Claws' original use being rejected by an ex-Pariah Redeemed thematically, but game-wise it seems to put the player in the position of needing to either spend CP on both trees or not be able to make effective use of Blood Claws (fueling their thematic guilt) in T2. So I'd like to suggest that the exchange of Blood Claws for Scarred Nails also exchanges the HtH tree for the Thrown Weapons tree, if the Pariah didn't have both (perhaps so thorough is their disgust, they struggle with any close combat, unless they're a more hardened, multidisciplinary user of weapons).
Top

I like this, I think it fixes the problem of them being two different trees nicely.
Top

I agree with Goliath. Or really just making it give both Scarred Nails *and* an additional Hth weapon when ascending with Blood Claws would be good and I don't really see any issues with that.

I honestly... look, the original idea really wouldn't work well at all, because the majority of Redeemed players will ultimately want to play Hth Redeemed I would expect. So if they take Hth as their main combat tree in T1/T2, which they would want to because it's an 80 CP tree, that change would mean they must avoid Blood Claws entirely, thus forcing them to keep just punching people through T2 probably, or the punishment for taking it being that the combat tree which they actually *want* to use gets automatically exchanged for Throwing. I can also see a lot of people missing this mechanic and getting their build completely screwed. Then their other option is to take Throwing or an additional combat tree in T1/T2, which not everyone would want to do. It's essentially helping a cool but niche playstyle by overwriting one of if not the primary playstyles of the class, which is a very strange idea. And being real, being stuck through T2 with Throwing Knife and Sling is a lot better than being stuck through T2 with Fist anyways.

Also, it doesn't make sense numbers-wise. Hth tree costs 60-80 CP, Throwing costs 40 total. I'd imagine you'd have to then make an exclusive skill(s) for Throwing Redeemed that they'd get by ascending this way to make-up for this deficit, but that would only make sense if it was the whole expectation of the class to go from Hth T2 to Throwing T3 by design, which it isn't.
Top

Oh! I hadn't realized how inexpensive the thrown tree is. I was imagining no one would take Blood Claws to only be able to use it for leveling through T2 and therefore wasn't worried about that. I wouldn't want such a swap to take anyone by surprise, and certainly not for an uneven exchange!

Again, I like the original concept and would like to see it be more attractive. Maybe if it's not as big a deal to get duplicate combat trees as I was thinking, then that's just worthwhile on its own as a secondary attack you can use w Moteless Eye. It's just then you're getting into more skill overlap, and I was hoping there's a way to allow something more focused.

Maybe give Scarred Nails higher base accuracy so the relatively inexpensive thrown tree feels more like a bonus than a requirement?
Top

Oh, I actually didn't realize Moteless Eye covered all ranged attacks now. In that case having Throwing secondary on Hth Redeemed actually is quite useful for certain matchups, which is great. But I agree with you that Scarred Nails is really undertuned and Supernal Volley is even worse. Both cost too much HP for what they do, and costing 1 MO an attack practically nullifies your MO regeneration from attacking more evils, thus meaning you're not going to be getting any extra Wrathful Smites off at all or even keeping most of your buffs on over a raid.

Scarred Nails is sub-par in terms of damage, element, accuracy and costs. Personally I think Slashing is a weird damage type for Redeemed. Otherwise the 1 MO cost should just be scrapped; it's not fun and you'd have to make Scarred Nails incredibly OP stats to make up for it. Then I'd buff the accuracy by a bit and the damage significantly, probably to at least 11/+5%. As for Supernal Volley, that needs the damage up *and* its HP cost reduced since taking 4-7 dmg per basic attack is some pretty wild attrition to deal with, even for Redeemed.
Top 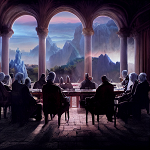 What if the Scarred Nails / Supernal Volley skills themselves granted some amount of +throwing accuracy? Some Redeemed will have gone HTH because they want HTH as a Redeemed.
Top

That could strengthen the Moteless Eye Dodge-buster niche, but maybe lends itself to the Claws-ignoring Thrown build. Maybe if you got that bonus from Scarred Nails / Supernal Volley only if you have HtH skills, i.e. causing HtH skills (at some ratio) to boost Thrown, or Thrown's damage, if you have SN/SV.
Top

Kandarin wrote: ↑Sun Dec 12, 2021 4:59 am What if the Scarred Nails / Supernal Volley skills themselves granted some amount of +throwing accuracy? Some Redeemed will have gone HTH because they want HTH as a Redeemed.

Maybe make Scarred Nails use the highest of HTH and Thrown accuracy, so a Thrown Redeemed can be built to play with both innate and acquired weapons, while an HTH Redeemed gets some flex with a good Thrown attack and keeps their HtH focus. In this form, Scarred Nails would still not benefit from Boxing.
A Parrot with a Blade - Sword & Pets NC || Angelica Aloe - Spell & Song Archon
GrayScimitar - Heavy Sword Tlac IB || PetMyKitties - Elementalist
RustyWire - Sprite & Glyph LS
Full scale rework of VW's Mark mechanics
Top

Goliath wrote: ↑Fri Dec 03, 2021 10:12 pm I would suggest making the ex-Pariah's exchange for Blood Claws still a HtH weapon instead

Why not make Scarred Nails a Light Weapon that can be "thrown"? So you have Scarred Nails, and Scarred Nails (Hurled). Seems almost like the Light Weapon system was built for this kind of thing. A more accurate, less damaging HtH attack, and more powerful thrown attack that costs HP and MO to use?
Top
Post Reply
12 posts